Cybersecurity is a pretty complicated science. And this complication goes not only because everything revolves around PCs – many people struggle to deal with definitions. Let’s check out two basic and the most controversial definitions – malware and virus.

People who know something, or even a lot, about cybersecurity, will likely think that there is nothing interesting for them. You can think so – but stubbornness is not the best thing in such a rapidly-changing environment. One day things will turn 180 degrees – and staying on your point of view can lead to bad consequences.

Malware and virus – what is the difference?

We used to think that malware and virus are synonyms – but that is not 100% correct. In fact, viruses are just another type of malware – like adware, spyware, or coin miner. The word “virus” became an umbrella term for all malicious software in the mid-’00s when viruses as malware were prevalent. Their name became a common noun – like Xerox or Thermos for copying machines and vacuum water flasks correspondingly. And even now, when viruses have almost disappeared from the malware world, this name is still in use. 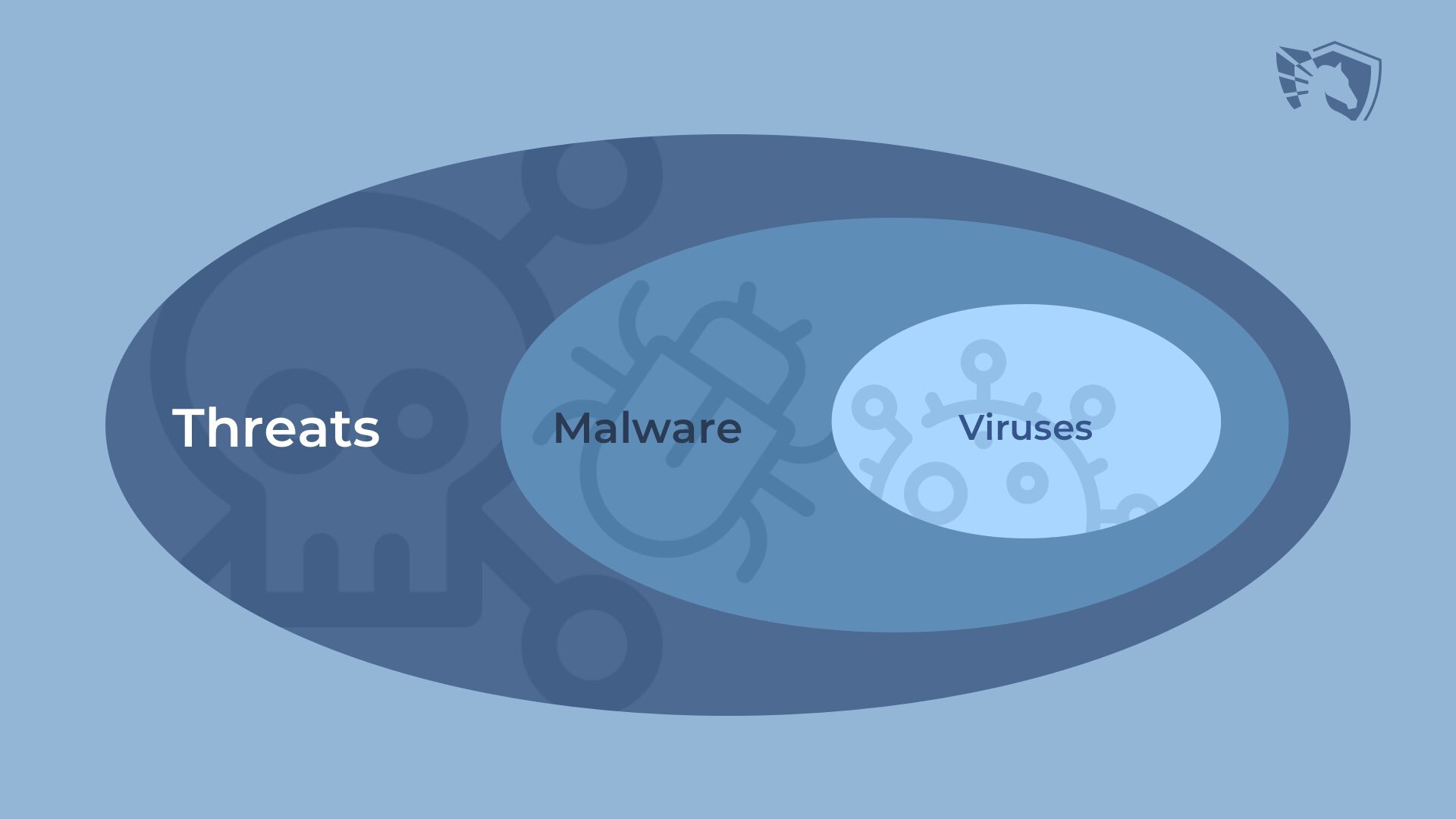 The definition of malware

Malware is a collection of source code or a program modified to act unwelcomely. Malware can be installed and used by another computer program (malicious software) or a web page (malicious adverts) containing malignant code. Malicious software is a serious threat to computers and individuals. All modern malware exists only to generate money for its victims. Earlier, malicious programs were often designed just to mischief someone or to boast of your hacker skills.

What is a virus?

A virus – in its initial meaning – is a malicious program type that is made to inject itself into other programs. Then, it forces them to replicate the virus’s code repeatedly. Pretty similar to how the biological virus acts. Such malware could cause serious troubles with PC performance and severe damage to your disk files. However, it is almost impossible to monetize it. Moreover, anti-malware software has been taught to detect viruses ultimately with heuristic engines.

What is the modern definition of computer virus?

The modern definition does not have many alterations compared to the original term, which appeared together with the first computer virus. The only change that happened in the conception of malware – instead of being just a mischief tool, it turned into a money-making thing. Hence, we can conclude the following things:

If the program meets three of these criterions, it is definitely malicious. You can surely miss one of the characteristics – just because the program does not show its nasty elements at the moment. However, most malicious programs are not so tricky – they generally start making your life harder exactly after the start.

What can I do to prevent malware injection?

The banal advice to use anti-malware software is good when we are talking about removing malware or trojan viruses. When it comes to stopping even its appearance, other things are needed. Exactly, the security tool with a proactive protection function. Such a feature allows the antivirus to scan your computer in the background and check the programs you launch. Proactive protection generally relies on a heuristic engine, which allows it to detect even the newest viruses that are not present in the detection databases. You can see the review of the most popular antivirus tool with heuristic engines on our website.

overall, it is recommended to follow basic cybersecurity rules without using anti-malware programs. Do not click on blinking ads on the Web, and do not open the files from people you do not know (from forums, for example). Beware of email spam – this thing became extremely popular nowadays and is used to inject very dangerous malware types – spyware, coin miners or even ransomware. Do not trust any extremely attractive offers, like “iPhone for $50” or “Amazon $1000 gift card giveaway”