Windows Remedy is a virus that was designed for the only purpose – that is to steal money from users who were tricked and fooled thinking that they are purchasing some good program in order to make their PC work better. imidlertid, the truth of the matter is that Windows Remedy malware is not able at all to help your computer increase its performance. It is only capable of stealing your money and deceiving you. Som du kan se, there is nothing fair in it. The only wise decision for you would therefore be to get rid of Windows Remedy scam. Please find the step-by-step removal instructions provided below. 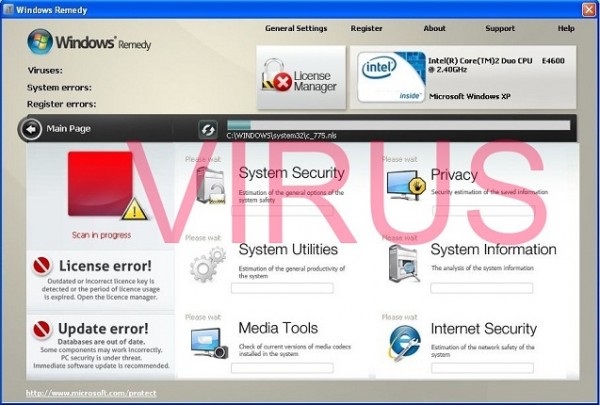 Windows Remedy, I øvrigt, comes from Russia. Its developers are just the load of crooks and frauds. They use fake Microsoft Security Essentials Alerts for spreading this malware called Windows Remedy. When this Windows Remedy virus is finally installed it would arrange series of fake system scans, reporting plenty of system errors at the end. Users start thinking that his/her PC is in the terrible condition. And some of them make the decision to buy the full version of this junkware called Windows Remedy, since it promises them to eliminate all detected threats. Please do not be deceived by Windows Remedy fake promises and by its developers. They are just the bunch of crooks that should be put to prison for their plentiful crimes.

We have elaborated step-by-step removal instructions for removal of Windows Remedy virus from your computer. Make sure to read all of them, otherwise we do not guarantee successful removal of this malady. Dermed, it is not enough just to run the program recommended by us. Make sure to accomplish all preparatory steps that we have stipulated below. Good luck to you!

Before downloading and running GridinSoft Trojan Killer for removal of Windows Remedy several additional preparatory steps need to be done. This is necesary, because Windows Remedy blocks your Internet connection, and you will not be able to run GridinSoft Trojan Killer. In order to prevent this blockage please take the following sequence of steps:
1. Make sure that your Operating System is tuned up in such a mode that hidden files and folders of your PC are viewable. The instruction on how to do it can be found her for Windows XP and her for Windows Vista/7.
2. Vælge “View” tab in the window that appeared, and in the advanced settings choose the option “Show hidden files and folders”. Press OK.
3. Go to the folder %User Profile%\Application Data\Microsoft.

In this folder there will be the main executable file of Windows Remedy (with the icon of *avi file), having some random name.
4. Rename the above-mentioned executable file into some other name of your choice and restart your computer. Upon the system restart Windows Remedy will no longer block your Internet browser.
5. Download the latest version of GridinSoft Trojan Killer to your infected computer, install it and run it.

The procedure for removal of Windows Remedy is shown on the video below: